Tuesdays are a little bit shit. I work from home, so I have met the new meaning of juggling. The Smurf is a trooper but quite frankly by the end of the day I'm frazzed and everyone presents themselves as a pest.

So, here's a happy thought, I made something recently. It's for the Smurf to cart his medicines to child care after our hospital adventure'. 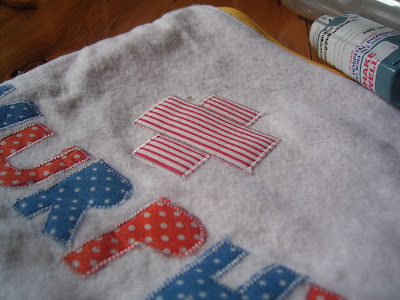 Just incase you don't believe me and think it's just a blog-ready appliqued piece of fabric, it is in fact a zippered pouch (and it's lined but you'll have to take my word on that one). 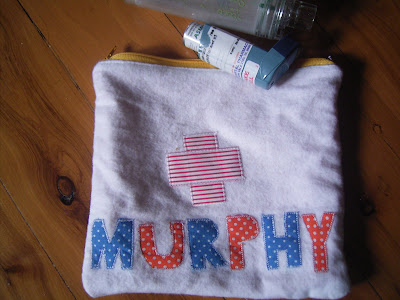 Funny, I had this cut out a couple of weeks before the craft weekend and managed about 1 letter of machine applique a week. Then Christie posted a much classier version of the same concept (and even managed to apply more appropriate colour) and I was spurred on to finish - albeit at the same sewing rate.

So, The Smurf's medication now travels in style, and I have to say it's bloody handy. Coming attractions include one replica for the nappy bag, the handbag, the glove box and who knows where else. They probably won't need all that lettering though.

So as you can see it's baby craft steps round here people, teeny tiny baby steps. One stitch can be considered a big achievement here right now.
Posted by SadieandLance at 11:53 pm