It's beginning to look a bit more like Christmas 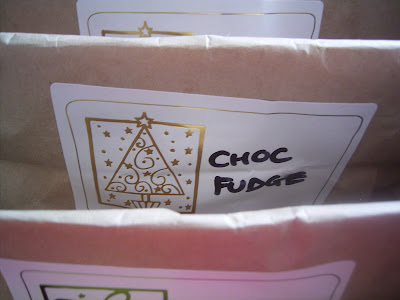 The oven has been going - well technically the microwave too. First up, Melting Moments and Chocolate Fudge for the Smurfs' Child Care teachers. Big hit it was, I dropped off that box above with the Smurf on Friday morning and by the time I picked him up the entire batch of fudge was consumed. I thought it might get lost amongst the boxes of Lindt chocolate and Ferrero Rochers parading through the door, so I was chuffed to hear it was consumed with gay abandon!

Oops I forgot to take photos between the baking/making and packaging so instead, here's the dregs which formed my afternoon tea. 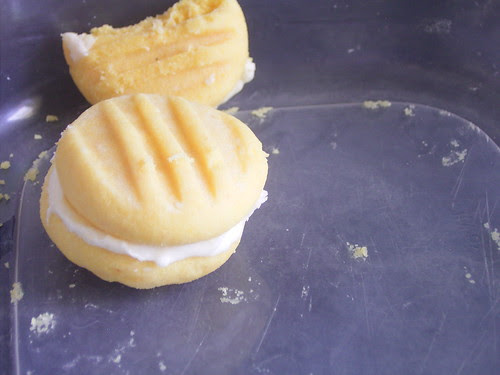 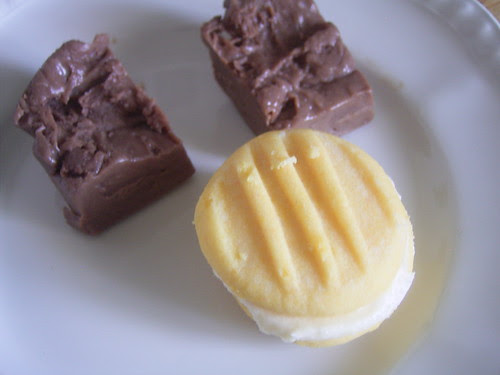 I'll make up for it by giving you the secret easiest ever fudge recipe - kinda like the Chocolate Slice but, even easier, promise!

- Line a slice tin with baking paper
- Melt the chocolate in the microwave
- Add the condensed milk and vanilla
- Stir like crazy till it's all combined (this will get a bit tough because it's not cooking chocolate, but don't fret too much about perfection here) I'm happy to sacrifice appearance for deliciousness.
- Pour into the tin, spread it out the best you can and put in the fridge to set
- Cut into squares and try not to eat too much before you give it away.

See, seriously easy and this will be a hit everywhere for you forever more I double promise. Now just don't tell anyone your new secret! And please don't bring it to my house when I invite you over for a BBQ cause I will already have made it to impress you.

Now I'm off back to The Toy Society to keep posting those 100+ toy drops that happened for this weekend's World Wide Christmas Toy Drop. I'm so inspired by all the people involved!
Posted by SadieandLance at 4:32 pm